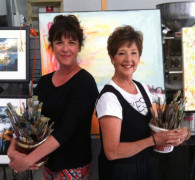 As the storm clouds rolled in, the stage was set for the #popart mother daughter artistic duel to unfold.

The Popart Collective summer series event held at Factory Espresso was a huge success. A large crowd gathered not only to watch the talents of Loretta and Larissa Blake, enjoy a wine and sumptuous snack, but to also support the local art scene. Popart collective is driven to raise awareness and support for the Orange Regional Arts Foundation (ORAF). 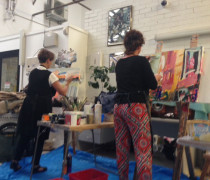 The Artists painting side by side

Loretta and Larissa were set up ready to create for the 3.30 kick off. Given a theme and only 90 minutes they set to the canvas. Loretta was given the “country” theme, and Larissa who has lived many years in Sydney was focusing on her theme “urban”.

The music swirled and the crowd was mesmerised by the art materialising before them.

The support continued as the paintings were auctioned then and there. Both paintings were purchased and heading to new homes with a great story to tell. Popart Collective successfully raised $1425 to support future events and ORAF.